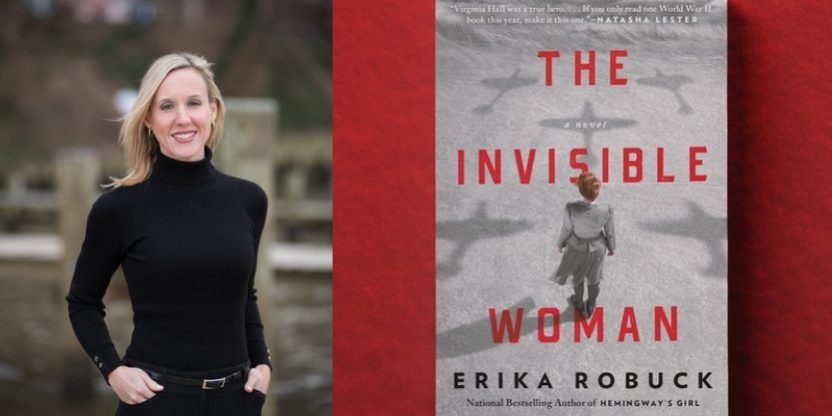 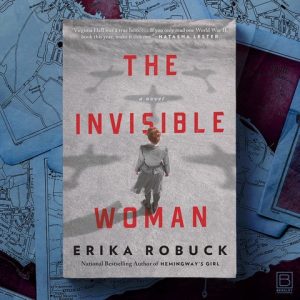 THE INVISIBLE WOMAN by bestselling author, Erika Robuck is the true story of WWII Secret Agent Virginia Hall, an American woman with a prosthetic leg, whose clandestine work with the French Resistance undermines the Nazi regime, creates escape lines out of Occupied France, and helps hundreds of Free French guerrilla fighters liberate a secluded mountain region whose courageous inhabitants harbor secret residents at their peril.

In a starred review, Publishers Weekly says,  “Robuck delivers an edge-of-the-seat WWII spy story based on the life of OSS agent Virginia Hall. Skillfully weaving events from the agent’s past with the tension-filled days and nights of 1944, Robuck creates an indelible portrait of an unforgettable hero.”

I was lucky enough to get a sneak peek into this amazing novel and was instantly engrossed. You don’t want to miss it!

What’s your favorite book from childhood? JAMES AND THE GIANT PEACH, by Roald Dahl

Favorite beverage/snack while you read or write? Black coffee

What book would you like to be a character in? Jane Austen anything

Who is your writing heroine/hero? Kristin Hannah

What’s your favorite genre to read in your free time? Historical Fiction

How do you organize your home library? Alphabetical, Paperbacks separate from Hardcovers, TBR pile, horizontal

Saddest book you’ve ever read? A LESSON BEFORE DYING, by Ernest J. Gaines

Name a book you can’t get out of your head? HAMNET, by Maggie O’Farrell

Where is your favorite place to read? Cozy couch corner, in front of the fireplace,

dog at my left, coffee on my right

Where do you do your writing? A desk in my home office, or a desk at our family’s river cottage.

What books do you reread over and over? POSSESSION, by A. S. Byatt, and THE GREAT GATSBY, by Fitzgerald

If you could meet one writer ~ living or deceased ~ who would it be? Ernest Hemingway

What book is on your bedside table right now? HAMNET, by Maggie O’Farrell

What do you have coming next for readers? The true story of two remarkable women in World War II—an American socialite who marries a Frenchman and joins the Comet Allied pilot escape line, and a Franco-British widow and mother who becomes a secret agent

to avenge her husband’s death—whose clandestine deeds with the Resistance come to a staggering halt when they are brought together at Ravensbrück Concentration Camp, and the true depths of their courage and strength are revealed.

Get your copy of THE INVISIBLE WOMAN here:

Erika loves connecting with readers. Catch up with her here:

Erika Robuck is the national bestselling author of Hemingway’s Girl, Call Me Zelda, Fallen Beauty, The House of Hawthorne, and Receive Me Falling. She is a contributor to the anthology Grand Central: Postwar Stories of Love and Reunion, and to the Writer’s Digest Essay Collection, Author in Progress. She writes satire (#Hockeystrong) as E. Robuck.