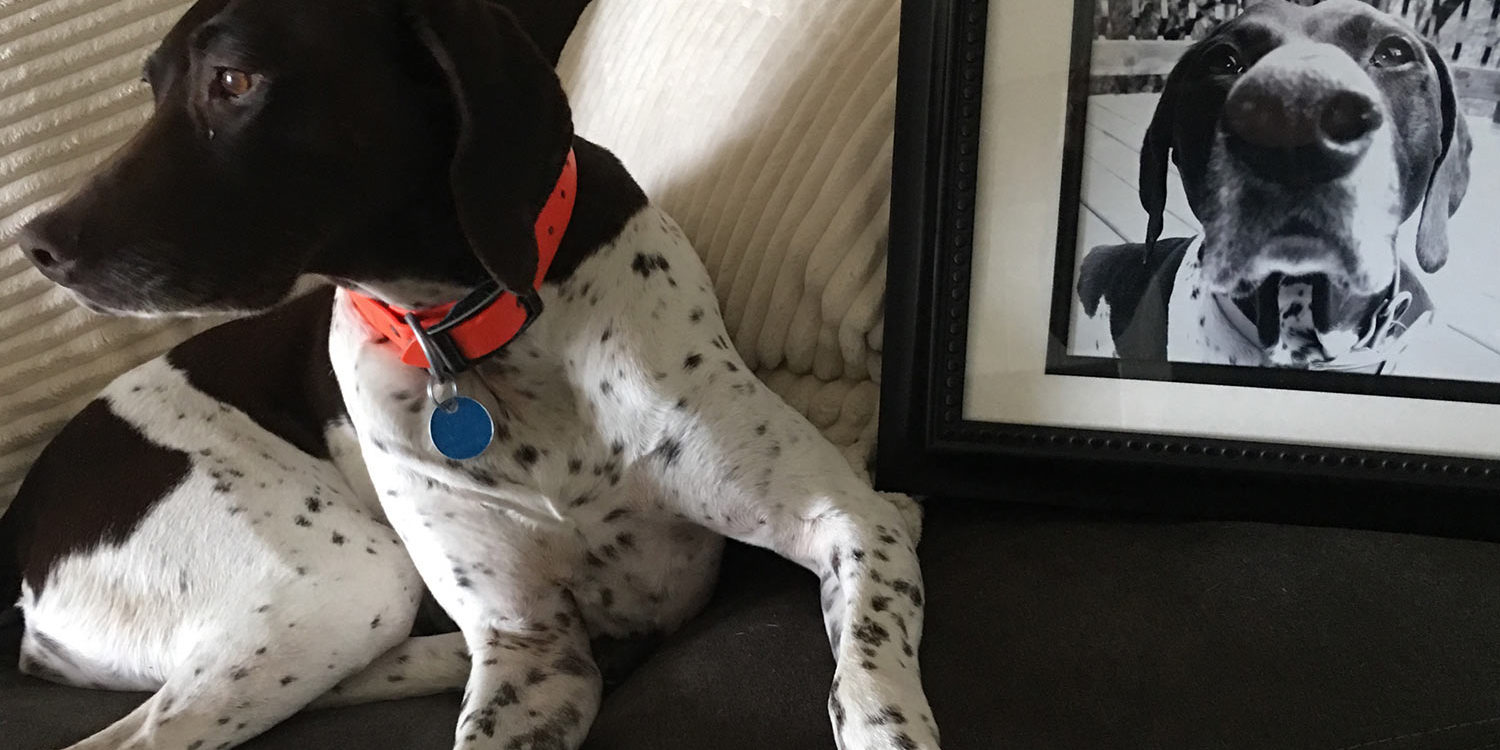 About fifteen years ago we set out on a quest to find the perfect pet to join our family. In choosing the pet, the three kids and I had only one criterion: we wanted a dog. My husband was a little more specific ~ a hunting dog. After much research we decided that a German shorthaired pointer was the breed best suited for our family. According to the American Kennel Club, “The German shorthaired pointer thrives as part of an active family. He is an even-tempered, intelligent and loyal family watchdog that has enthusiasm for its work. An athlete, he can adapt to his living situation, but requires consistent exercise.” Later, I learned that “consistent exercise” actually meant “constant” exercise, but I’ll get into that later. Through word of mouth we learned about a man who bred German shorthairs and he had a new litter for sale.

Finally, on a cold April afternoon, the five of us made the two hour drive to meet the puppies. We were instantly enamored with the tiny brown, black and white be-speckled pups, just six weeks old. We all had our favorite and took turns debating the merits of each. We had the decision narrowed down to two puppies when my husband drew our attention to a kennel outside the barn. Inside the shelter was a shivering, small, liver-spotted female about four months old with a dark brown head and sweet amber-colored eyes. We instantly fell in love and Maxine became part of the Gudenkauf household.

Maxine lived up to the definition of a typical German shorthaired pointer, and as I mentioned earlier needed constant exercise. She was a great hunting companion for my husband and loved heading out into the field to point pheasant. If Maxine wasn’t walked or didn’t have the chance to run every day mischievous destruction was sure to follow. Shoes would disappear only to be found later gnawed to bits, food would mysteriously vanish from countertops, especially sticks of butter, and once we discovered a large hole eaten out of the center of our mattress. But Maxine was also patient and smart, loyal and loving. When one of our five was diagnosed with cancer, Maxine, once the bossy center of our household suddenly found herself on the sidelines. We had little time to walk her and between the trips to the hospital, work and school, Maxine was often left home alone for long stretches, but she was always there for whoever needed comfort.

We could cry into her soft fur when we became overwhelmed with the reality of the illness that changed our family forever, was ready and willing when we had a few minutes to take her for her much loved walks, and she would lie patiently at our side, her head on our laps, when we had no energy to do anything else.

Just after Christmas, several years ago, I was in the midst of writing my novel, LITTLE MERCIES, and the dog in the story, Dolly, was modeled after Maxine. It was the least I could do. Through the years, Maxine had been with me during the writing of all my novels, often sitting with me in the desk chair as I wrote. On a sunny, bitter cold winter evening, Maxine died suddenly. She had spent the bulk of the day playing outside with the kids and their cousins, sledding and tromping through the woods. Looking back she had been acting a bit strangely that day. She kept licking at the air, tried to dig through the snow to eat at the dead grass, and she seemed exceptionally tired when she came inside for the day. We figured she ate something that didn’t quite agree with her and it wasn’t until she began whimpering in pain that I called the veterinarian. Since it was a Sunday evening, the after-hours call service promised that the doctor would call me right back. By then it was too late, with the five of us surrounding her, Maxine died. Her passing must have been excruciatingly painful, but mercifully, it was quick, just a matter of a few minutes. The vet surmised that it was most likely gastric volvulus, in simple terms a twisting of the stomach, a condition most common in dog breeds like German shorthaired pointers who have deep chests.

We were devastated. Our home seemed so empty without Maxine. Our perfect for us pet was gone.

Months passed and while we continued to feel the deep loss of Maxine, we were ever mindful of the joy and happiness that having a dog in the home brought our family. The kids and I started casually scanning the newspaper for dogs for sale. I was leaning toward getting a bulldog or a basset hound, the kids were thinking along the lines of a Goldendoodle. My husband, still so sad from losing his hunting buddy, had little interest in a new dog. I, on the other hand, felt that this was just what our family needed. I ramped up the search and when my husband realized we were on the edge of adding a bulldog or a Goldendoodle, decidedly not hunting dogs, to our household, he started including his own two-cents. A Viszla or a Weimaraner, maybe. Both great hunting dog breeds. And possibly, just maybe, another German shorthair.

This was all the encouragement that I needed. I started looking on-line for German shorthair breeders and litters. I stumbled upon a great organization called Great Plains Pointer Rescue, Inc. and filled out the adoption paperwork. We were so close to adopting a needy dog from Great Plains organization when I received an unexpected phone call. It was the breeder, Barry, from whom we received Maxine all those years ago. I had left a message for him a few months before, when we first started looking for a puppy, but I never heard back from him. I assumed that he had stopped raising dogs and continued my search elsewhere. The phone call was a welcomed surprise. I explained who I was and Barry remembered our family and Maxine. I told him how much we loved her, how she was the perfect dog for our family and how she recently passed away. He said he had an eight month old female German shorthaired pointer available if we wanted to come see her. We did.

My husband and I made the trip we had made ten years before through the rolling Iowa countryside. The kids had their various sport and work schedules to contend with so it was just the two of us this time, but they anxiously awaited our phone call telling them what we learned about the dog. We pulled down the long driveway and parked. Just like years before, it was chilly spring day. Four shorthairs, of various ages, were watching us curiously from their kennels. “I hope that’s her,” my husband whispered to me, indicating a young dog that looked nearly identical to Maxine – same dark head and white and brown livered coat. For a moment I could see the boy that I imagined my husband used to be, before I ever knew him. “I really hope that’s her,” he repeated. It was. Barry explained to us that the eight month old pup was recently returned to him by the hunter he sold her to because she was soft, scared of loud noises and shy around others. We didn’t care. She intermittently approached us and then skittered away, but she was sweet and we knew she was the dog for our family. Barry pulled out the puppy’s papers and then went back to his office and pulled out Maxine’s genealogy history. After consulting the documents Barry smiled broadly at us. Our new puppy’s mother was a littermate to Maxine. Maxine was this puppy’s aunt!

We named the puppy Lolo after the Olympic hurdler and Iowa native, Lolo Jones. Our Lolo has seamlessly joined our clan and certainly has made herself at home. I imagine her Aunt Maxine, from the great beyond murmuring in her ear, That spot there, next to the windows, is the best place to soak up the morning sun. And right there, in front of the fireplace is the perfect location to lie down and chew on your bone on cold winter days. You can play in the woods, but don’t go too far (Lolo doesn’t). Don’t chew on shoes, they hate that (Lolo does). And I imagine that Maxine whispers to Lolo about us, her human family ~ all good, I hope.