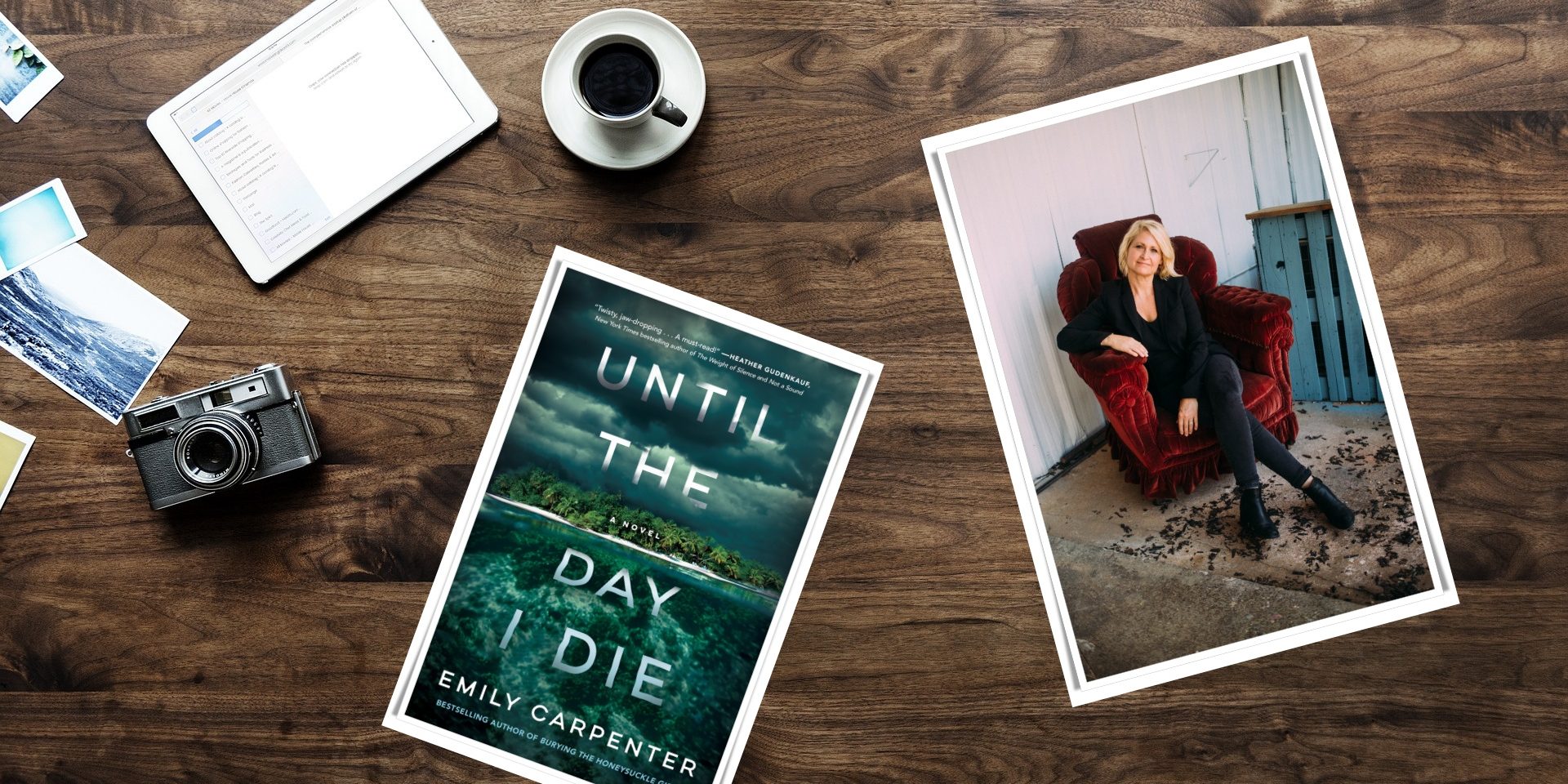 Heather: As you know, I loved everything about your upcoming novel, UNTIL THE DAY I DIE, especially the mother daughter team of Erin and Shorie Gaines. Where did you get the idea for the novel?

Emily: Thank you so much! I had such fun writing that mother/daughter duo so it’s truly gratifying to hear you say that. About the time I was supposed to be pitching a new book to my editor, I had a couple of disparate ideas 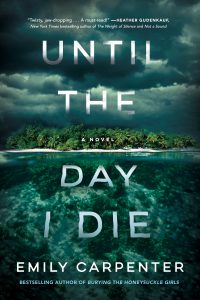 floating around in my head. The first was a Lord of the Flies with soccer moms! Which is to say, I basically wanted to stick a handful of women just like me on a deserted island and make them fend for their lives and, in the process, go off the rails psychologically. I thought that sounded delightfully awful, but then I had the idea to do something that involved tech – some kind of futuristic but believable mechanism that would be a huge part of the plot – and I came up with the idea for the app that does your budget and pays your taxes. Additionally, I’d only written main characters who were in the 20s to early 30s range, and I was feeling the pull to write an older woman. So, as you can see, I just kind of smooshed all those things together into one book!

Do you ever do that? Combine several unrelated ideas into one book? How do you know you’ve really hit on the RIGHT idea?

Heather: I love hearing this backstory! What a perfect combination. For me, I often include several random ideas in my novels. In BEFORE SHE WAS FOUND, my upcoming novel, I combined a small town’s creepy folklore with modern day social media and then chaos ensues. While I’m never sure that I hit on the perfect idea, I find that if I keep thinking about a premise no matter how hard I try to set it aside, it’s the right project for me at that particular time. That doesn’t mean that my novels don’t change significantly from when I first start writing to that final draft, they do, but more often than not the general theme remains constant.

By the way, I really think you need to patent that app – you would make a fortune! What kind of research did you do for UNTIL THE DAY I DIE? Please tell me you got to go to a tropical island!

Emily: As far as visiting a Caribbean island, I did really want to go to St. Lucia, but I just couldn’t make it fit with my life at the time. The good thing was, I’d been to St. Thomas, St. John, and Turks and Caicos in the past, so I had a pretty good idea of what Ile St. Sigo might look and feel like. And it’s always fun to create your own imaginary island, so nobody can call you on getting details wrong! Jax, the app I created, was the real challenge. I am not a tech-oriented person, and so doing that research was incredibly challenging. I had to learn how an app like that would feasibly work, but also I had to learn all about start-ups. How they operate and scale and then get bought. Luckily, a woman who works with my husband has a son who is this incredibly brilliant and accomplished app developer, who’s created several successful gaming apps out in 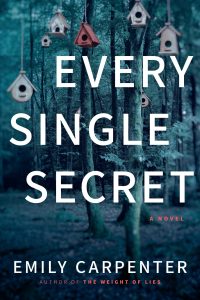 Silicon Valley. He was generous enough to sit down with me one Thanksgiving break when he was in Georgia, I showed him what I’d already come up with. I felt kind of mortified to show him what I’d done, in case it was completely ridiculous, but he was really encouraging. I had two questions for him, basically, “can I make an app like this somewhat realistic? (and what all did the creators have to do to bring it to life?) and how could somebody steal money from it?” He was incredibly helpful and made the inner workings of the app make sense. It’s definitely not an app that could work now because of the massive security issues with private information, but it could happen in the future. After I wrote the book, one of my longtime critique partners who’s a computer guy, was a real help in making my language surrounding the start-up and app development sound a little more natural.

So now I’m curious. What’s the most daunting research you’ve ever had to do for a book, where you really felt like you were out of your element?

Heather: Wouldn’t it be amazing if your app was brought to life one day? Put in for your patent right now!

For me, the most daunting research I had to do was for my last novel NOT A SOUND. My main character, Amelia, is profoundly deaf and the story is told in her point-of-view. While I have a significant hearing loss, I can hear, so the thought of writing from a deaf character was terrifying. It was so important for me to be accurate and to be respectful to the Deaf community. I interviewed audiologists and teachers of the deaf and hard of hearing. I visited with a young woman who has a cochlear implant and received advice from members of the Deaf community. In the end, I hope that I did Amelia justice.

With my upcoming novel, BEFORE SHE WAS FOUND, I had to jump into the world of what it’s like to be a young teen in the world of social media. I’m so happy that I grew up in the 70s when passing notes was the closest thing to Snapchat that we had!

I’ve always been intrigued by critique partners ~ what does this look like for you?

Emily: When I wrote my first book, I was sort of adrift. I knew it wasn’t ready to be sent out, but I didn’t know how to get it to the next level without paying somebody. I joined a local critique group that met twice a month where everyone read five pages out loud then people would throw out off-the-cuff comments. It was fun but I quickly figured out I needed something more in-depth. So another guy in the group and I agreed to swap full 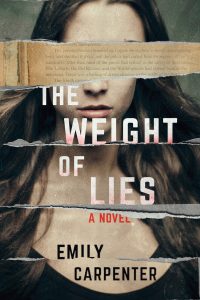 manuscripts and give in-depth notes. We did that for about two years and then we brought some other local published authors into the group. The group’s continued to morph as people’s availability changes. The exciting thing is, my original critique guy just sold his middle grade book!  And another group member’s book blew up and she got really busy. So now I mainly use two other authors (and friends) who read my book once it’s about in a second or third draft. They make broad comments about the plot and characters and just generally whatever hits them as they read. I give them free rein. I really want honest reactions to the book as a whole – what the story makes them feel, what’s not working, or if anything seems too farfetched or silly. And I do the same for them. I am so thankful for my critique partners, they’re awesome authors and sometimes a shoulder to cry on! 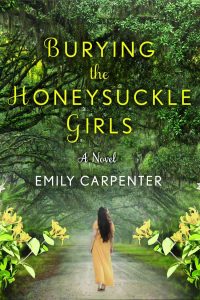 Heather, thanks so much for inviting me into your space. I’ve had such fun chatting with you!

Heather: Thank YOU, Emily! UNTIL THE DAY I DIED comes into the world on March, 12 2019. I can’t wait for the world to enjoy it as much as I did!

Emily Carpenter, a former actor, producer, screenwriter, and behind-the-scenes soap opera assistant, was born and raised in Alabama. After graduating from Auburn University, she moved to New York City and now lives in Georgia with her family. She is the author of Amazon bestselling Burying the Honeysuckle Girls and The Weight of Lies.

To learn more about Emily and her books you can connect with her here: